Drawing a robot from beginning to end 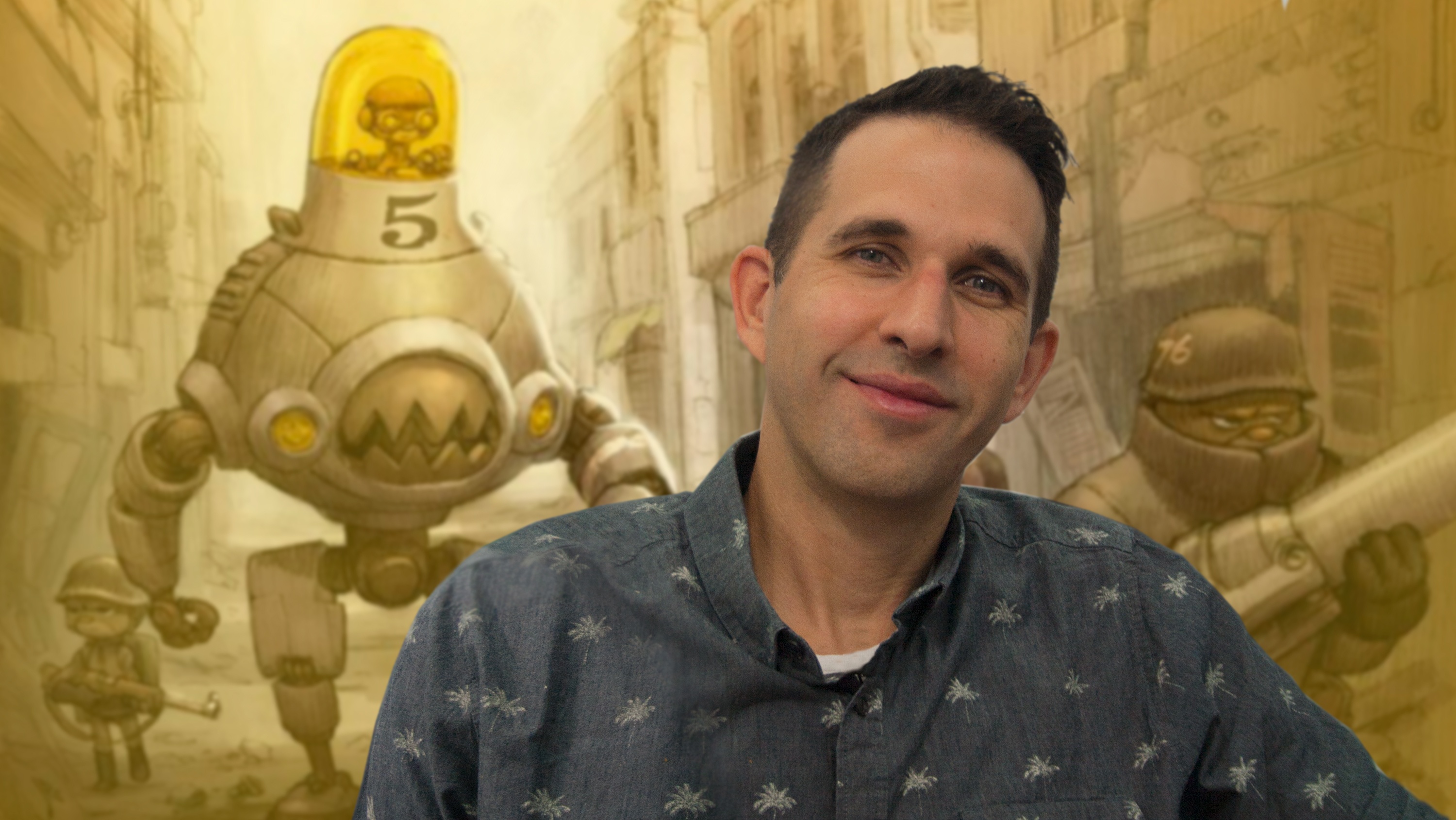 Robots, vehicles, animals of other dimensions, stages, children’s albums, series and animation lengths. Each and every one of these themes or projects are present in Jake Parker’s career. An own, eclectic and multidisciplinary universe based on ink, line and color. More than two decades dedicated to illustration and the world of animation.

He works as a creative and teacher, with extensive professional experience in dealing with more than one hundred clients in the field of communication, animation and advertising. He has always left a space of his time to dedicate the training with the face-to-face workshops he teaches throughout the world. This time virtually, Jake, will bring us closer to his way of seeing, structuring and shaping one of his most recognized hallmarks: The Robots.

For this we will work on four phases that will be the following:

First phase : Concept or design. A series of small sketches with details of the lace, study of proportions, approach of movements for the robot, study of the silhouettes and pose together with the decision making of main and secondary forms to give character to the drawing, an approximation to the idea that We want to develop the way we want to give it.

From there we will go to a second phase : in which we try to give and how a defined position to the robot and how we are going to draw a good structure and a solid base to get a good three-dimensional look. We will see and test what your final position will be. Adjusting both form, pose or silhouette to a compositional set as a fundamental axis. We will fit once the structure is decided, what are the details that we can add to the robot to give it our own identity and the attitude we want to grant.

In this phase we will take into account a factor to which Jake attaches great importance.

We must always think that the theft is being assembled in a “real” way, that is, as if we were operators of an assembly factory. With that we get to study and take care of the “engineering when drawing” aspect: to provide the illustration of a character where it is clearly seen how the robot’s metal parts could be stored and loaded in a factory and sent for assembly and assembly final. We must always think about how the robot would work in real life. This will help us so that the robot can have a second life in 3D.

The next step will be the phase three : Inking. We will see how to try with markers and add value to both the line and the stroke. Markers that are basically indelible, water resistant and with a brush tip. This will allow us to mark both thick and thin lines. In this sense, we will play with the lights and shadows as well as with the depth and warmth of the color range to be used.

And finally we will close with the phase four : Color and finish the robot with the mixed use of markers and colored pencils. And why certain colors are going to be used and what is the reason for doing so in line with the character we want to give the character. Cold, neutral and warm tones in line to find the perfect balance in our final drawing.

In this phase we must pay special attention to the areas of darkness and how we want to highlight those areas in which the light falls. Release some parts of the composition from saturation and confer those effects that give dynamism to the entire composition.

And last but not least: do not forget that to draw you have to play. Do not stop experimenting and mixing colors. You have to try and lose your fear of using all the tools you have at your disposal. 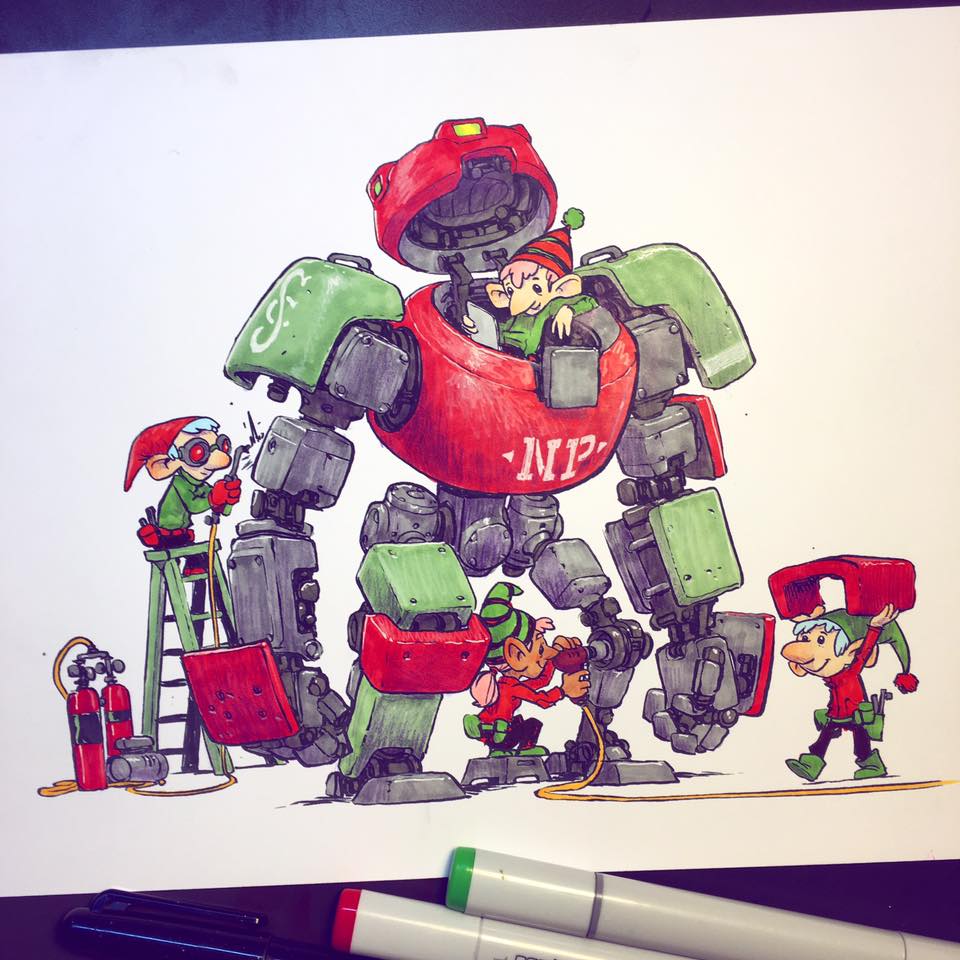 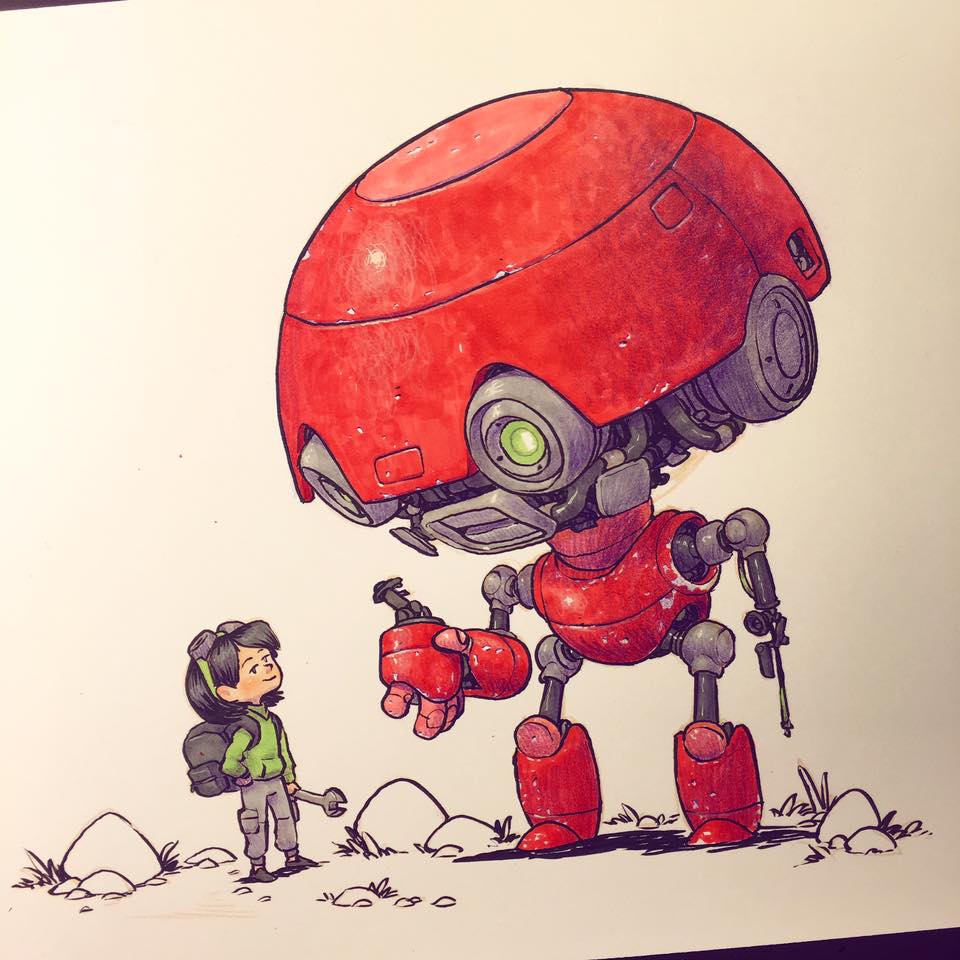 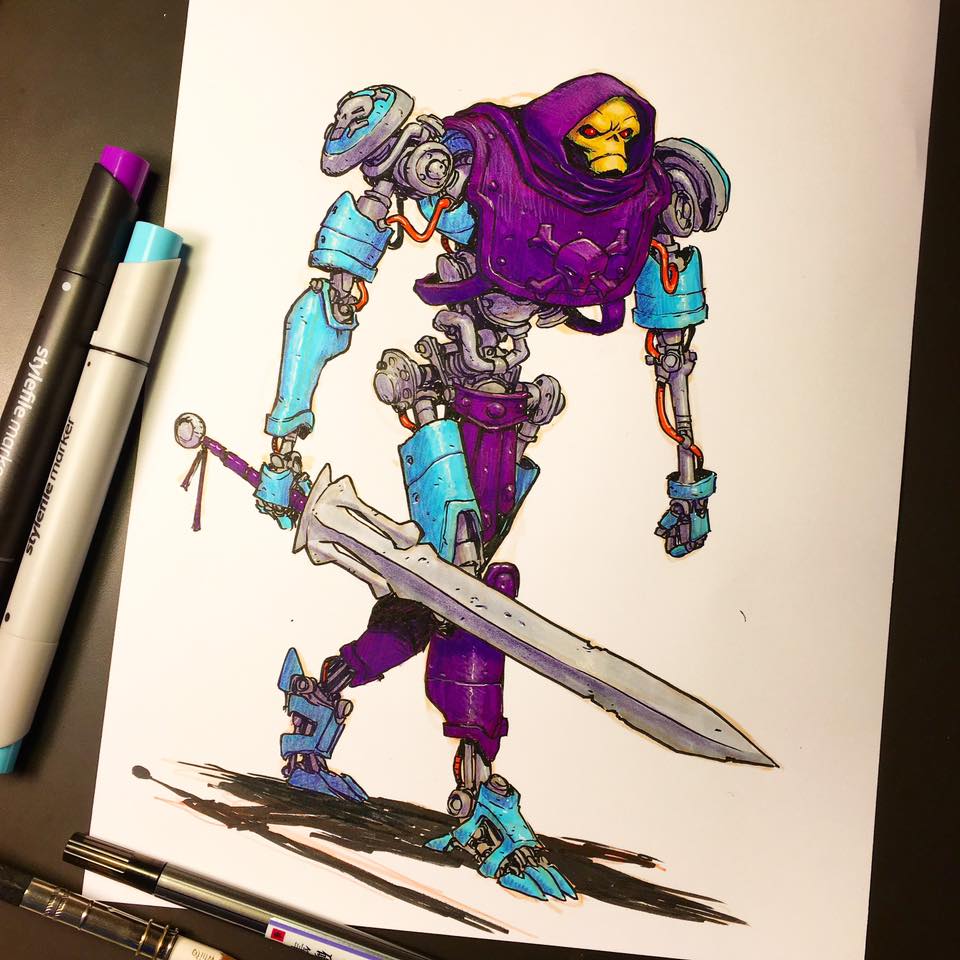 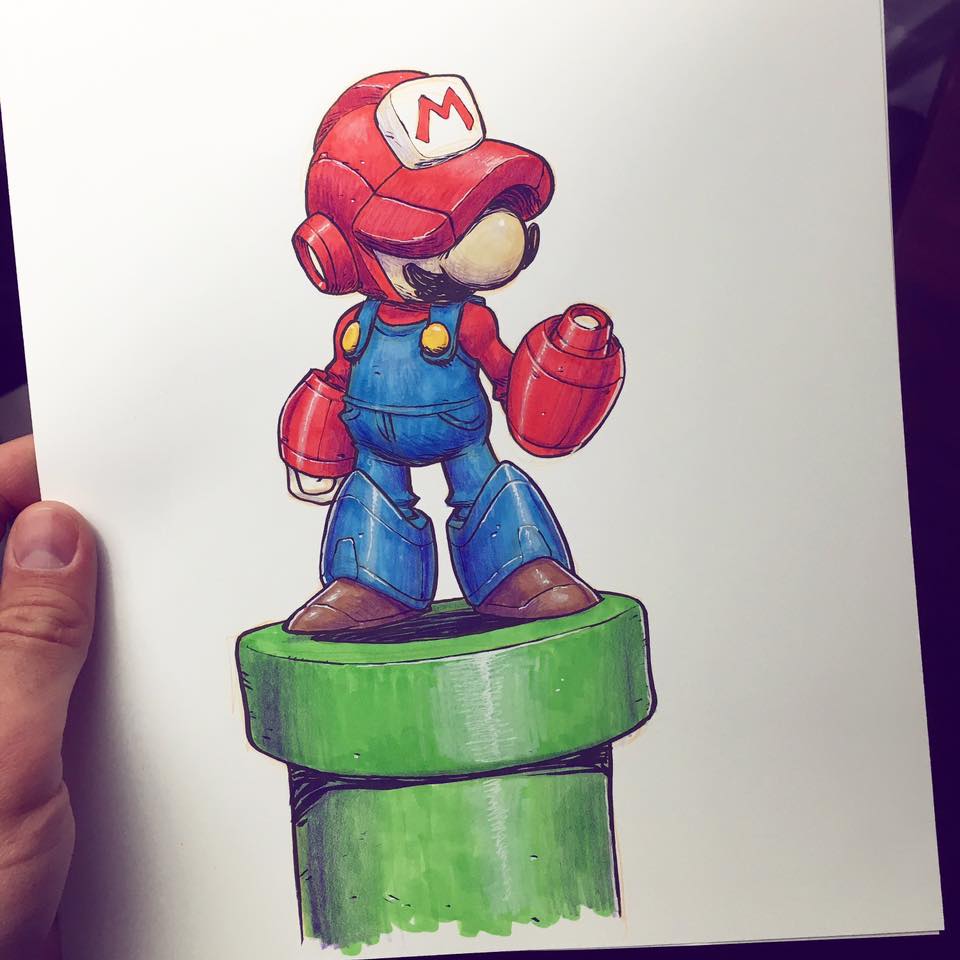 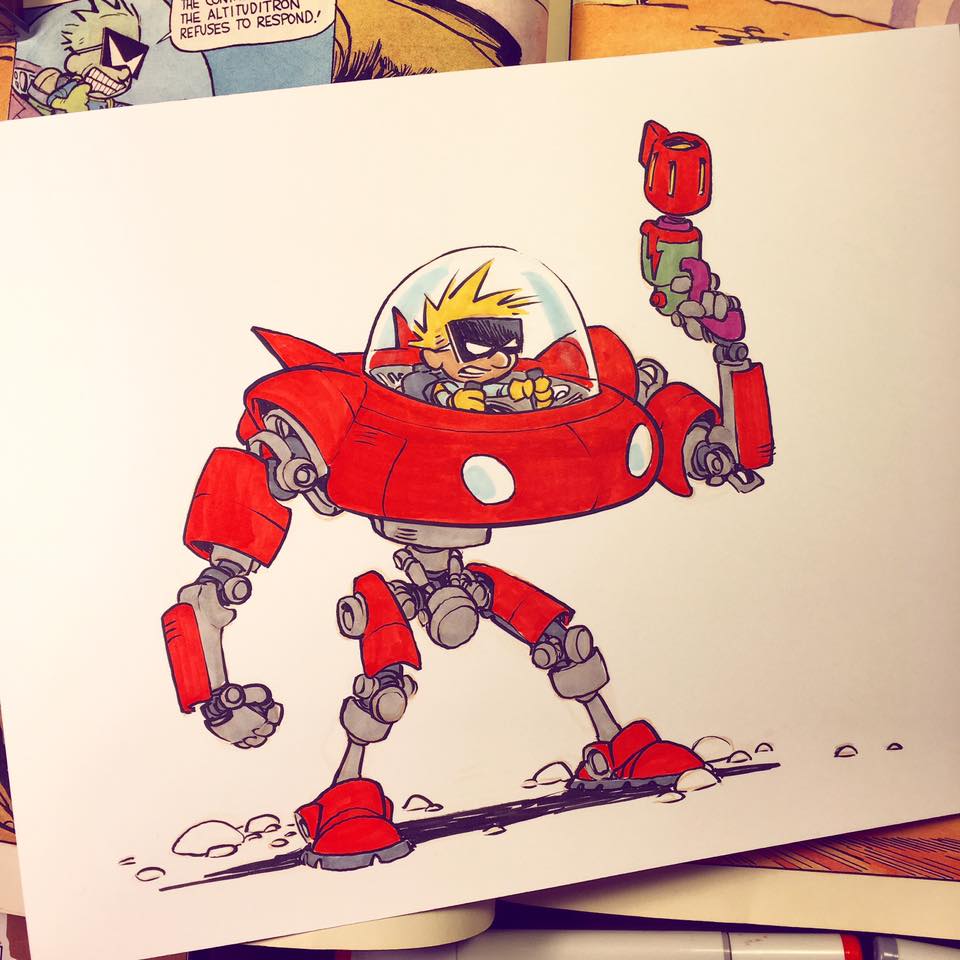 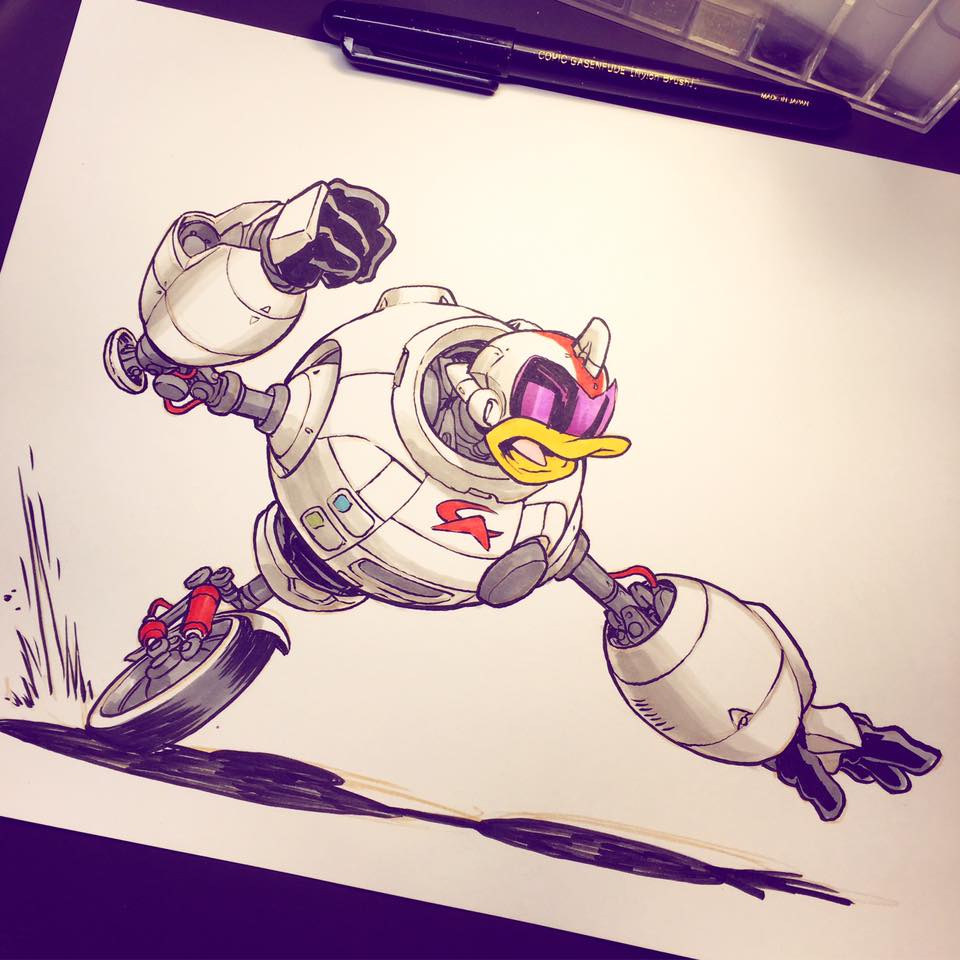 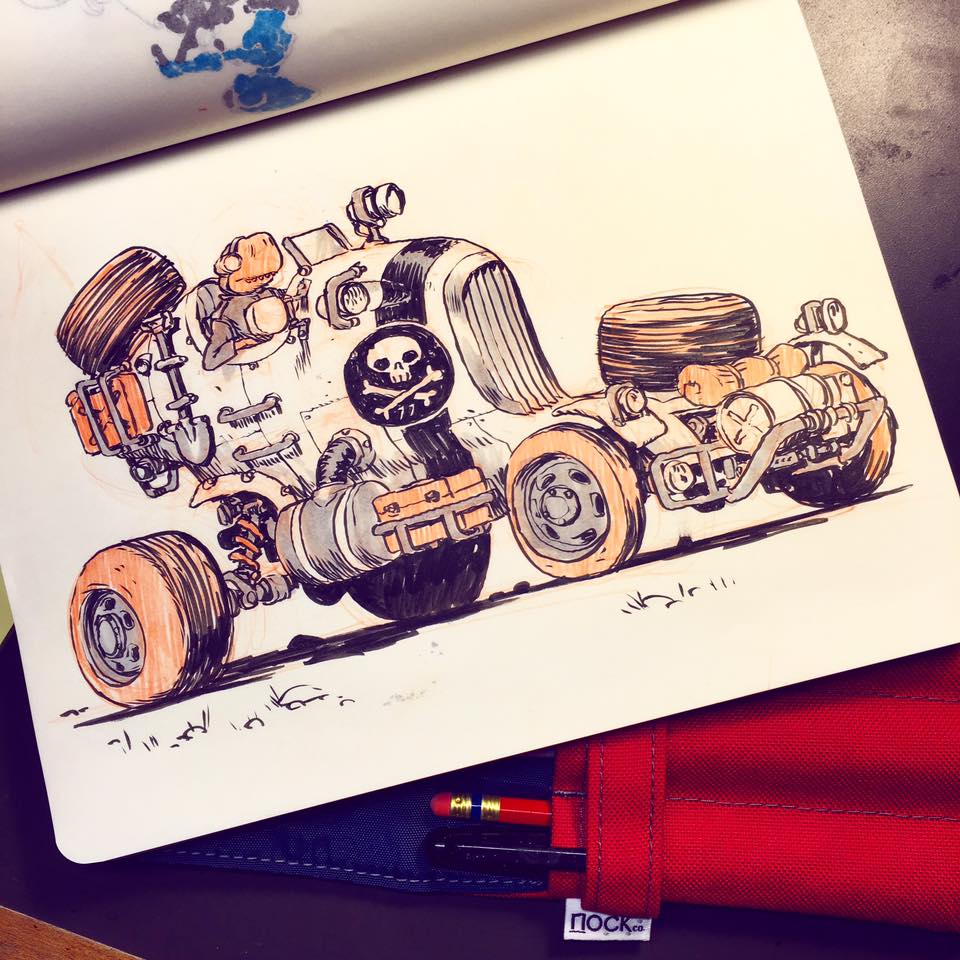 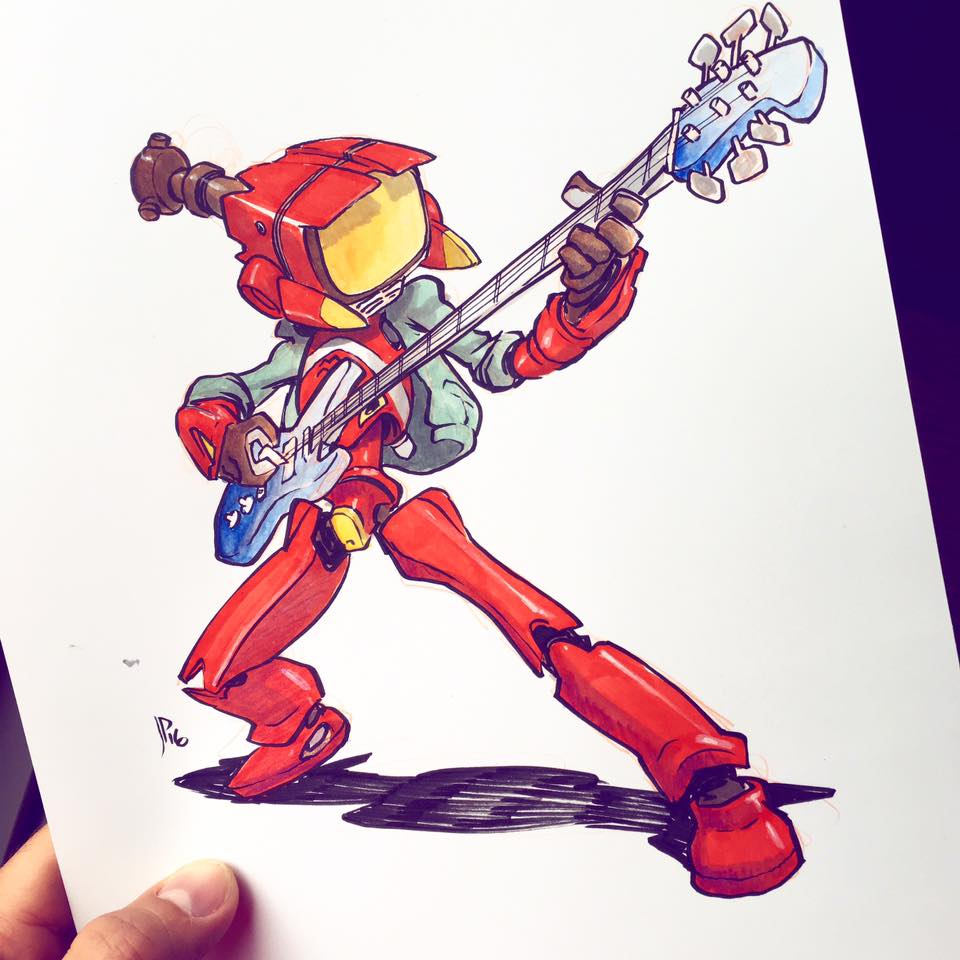 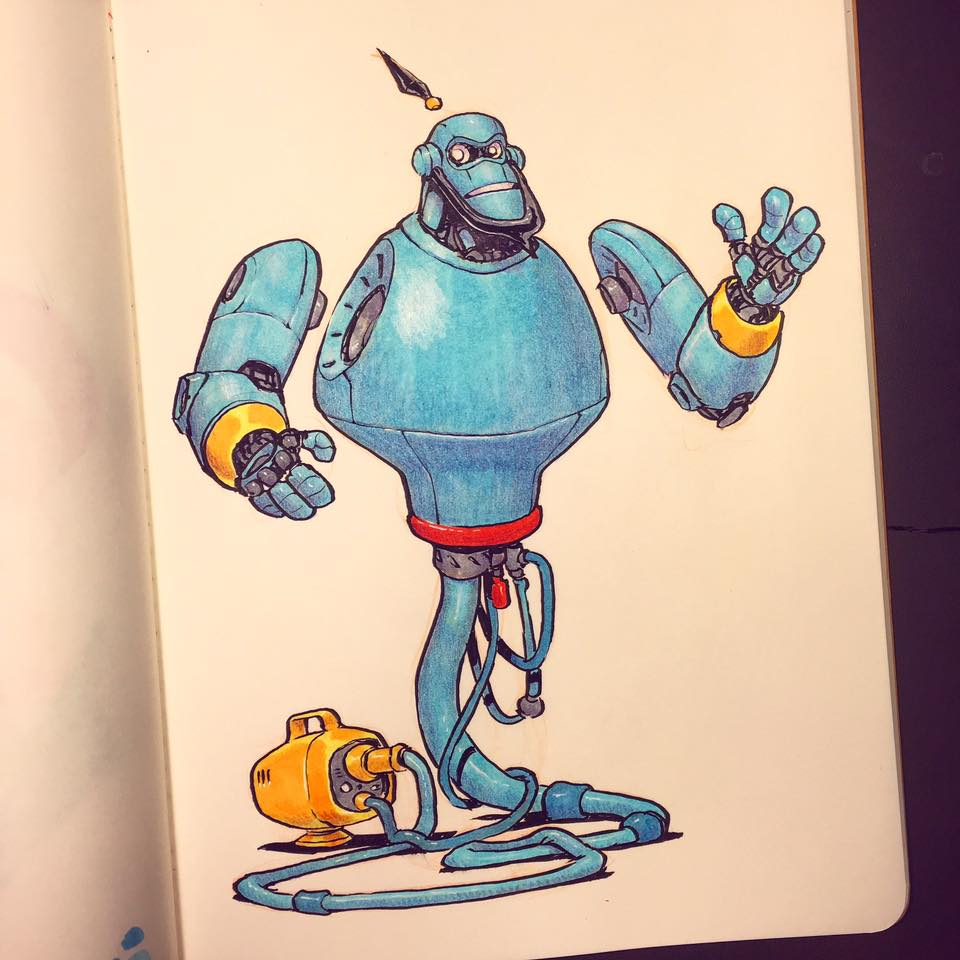 During this course you will learn to make sketches, draw, give volume and apply color to character (robot and its pilot) using traditional drawing techniques. The result will be a definitive illustration on paper.

Who is it for?

This course is aimed at artists or illustrators, hobbyists or professionals who want to know techniques, resources and procedures to learn, improve or develop their talent in the field of traditional illustration.

Personal computer or tablet to view the videos. It is also possible to use a smartphone, although we recommend larger screen sizes that allow you to better appreciate the details. On the other hand, each one can make use of the preferred drawing material to carry out the practices, although we recommend paper, red pencil for sketches, markers for inking and giving color.

The materials, we reiterate, are recommended. You can do the tutorial without all the materials or in formats other than those oriented in the video.

All BLURONE courses are taught online and have the same objective: to achieve training without interruptions and that suits you. 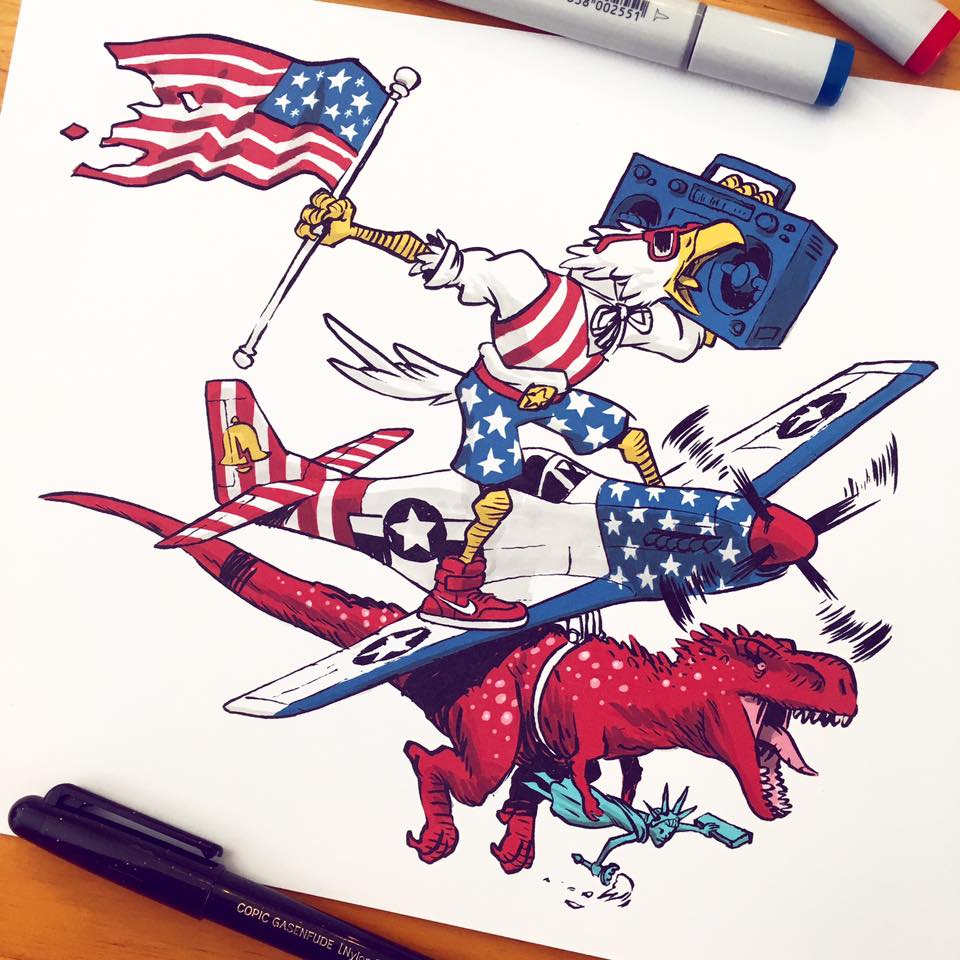 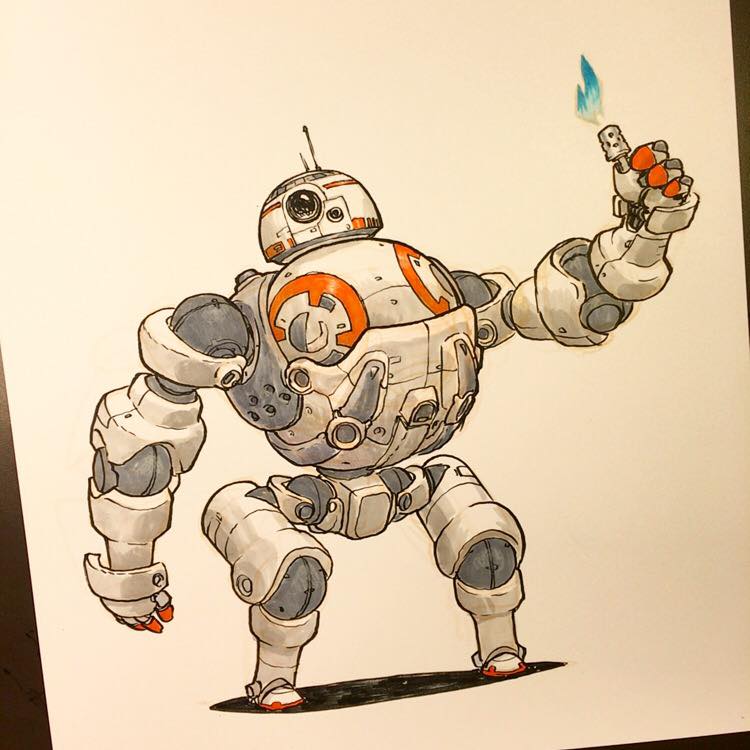 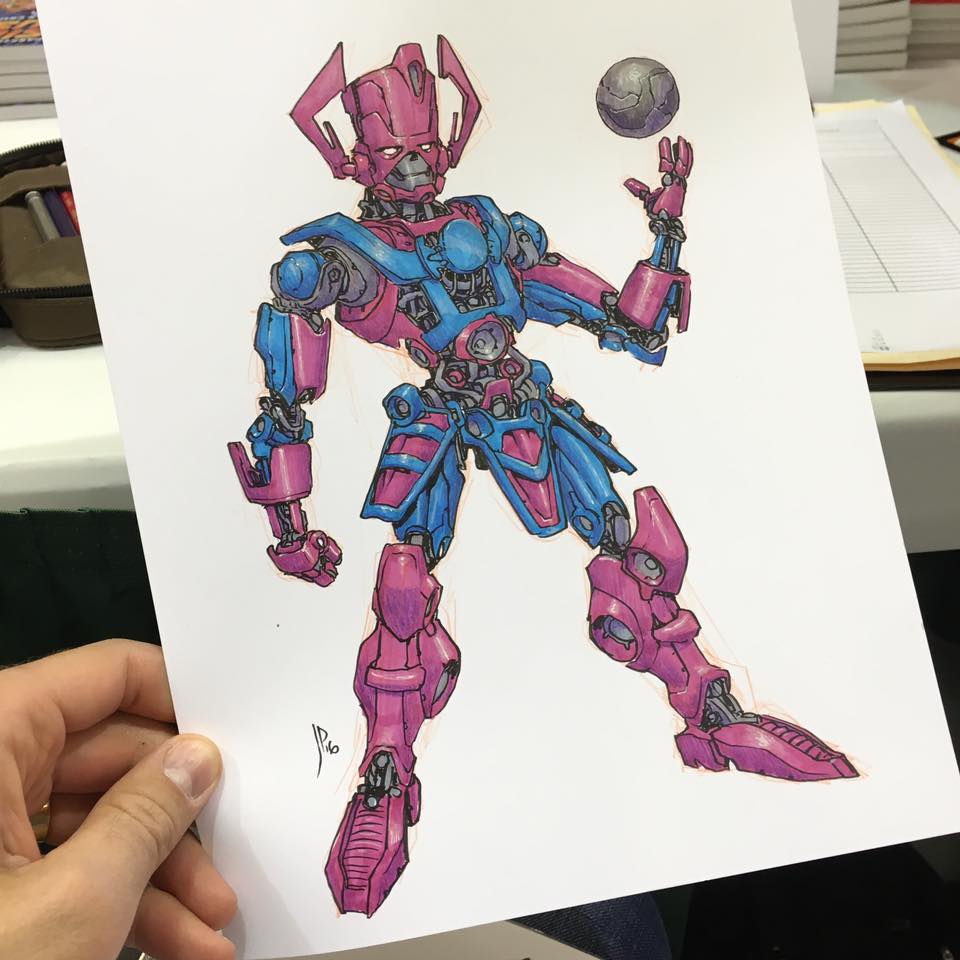 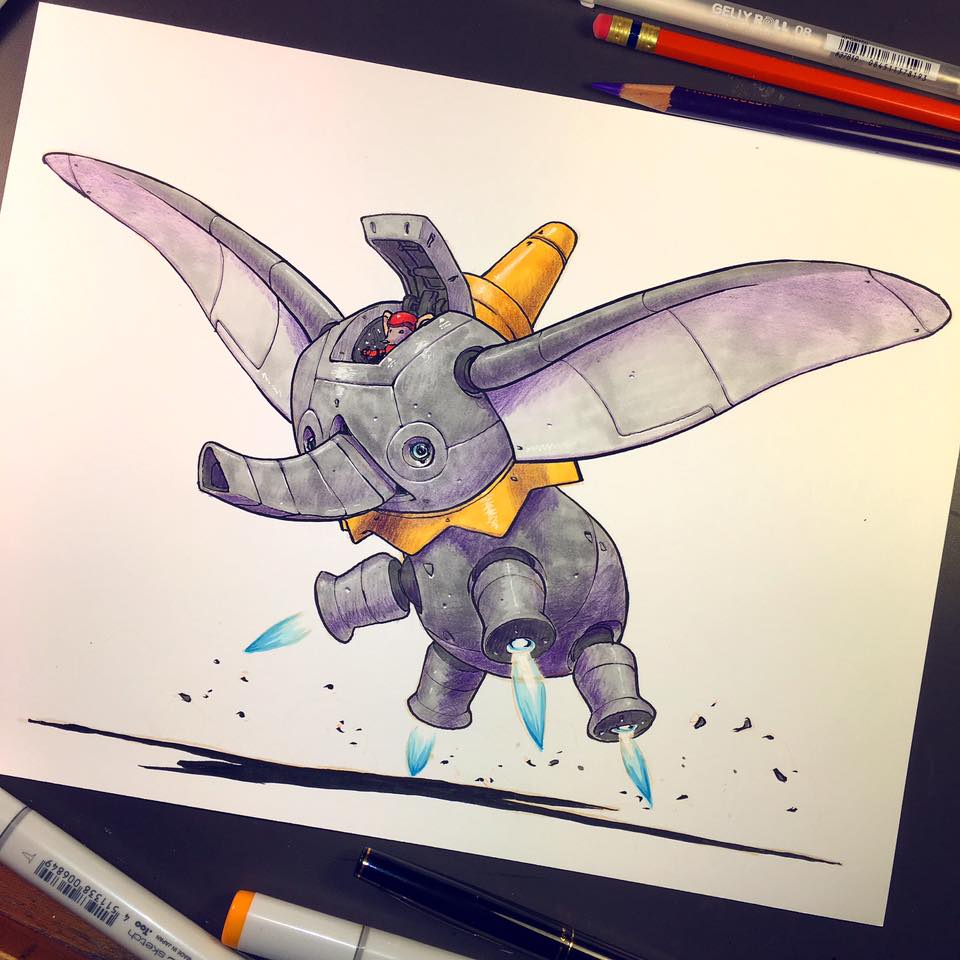 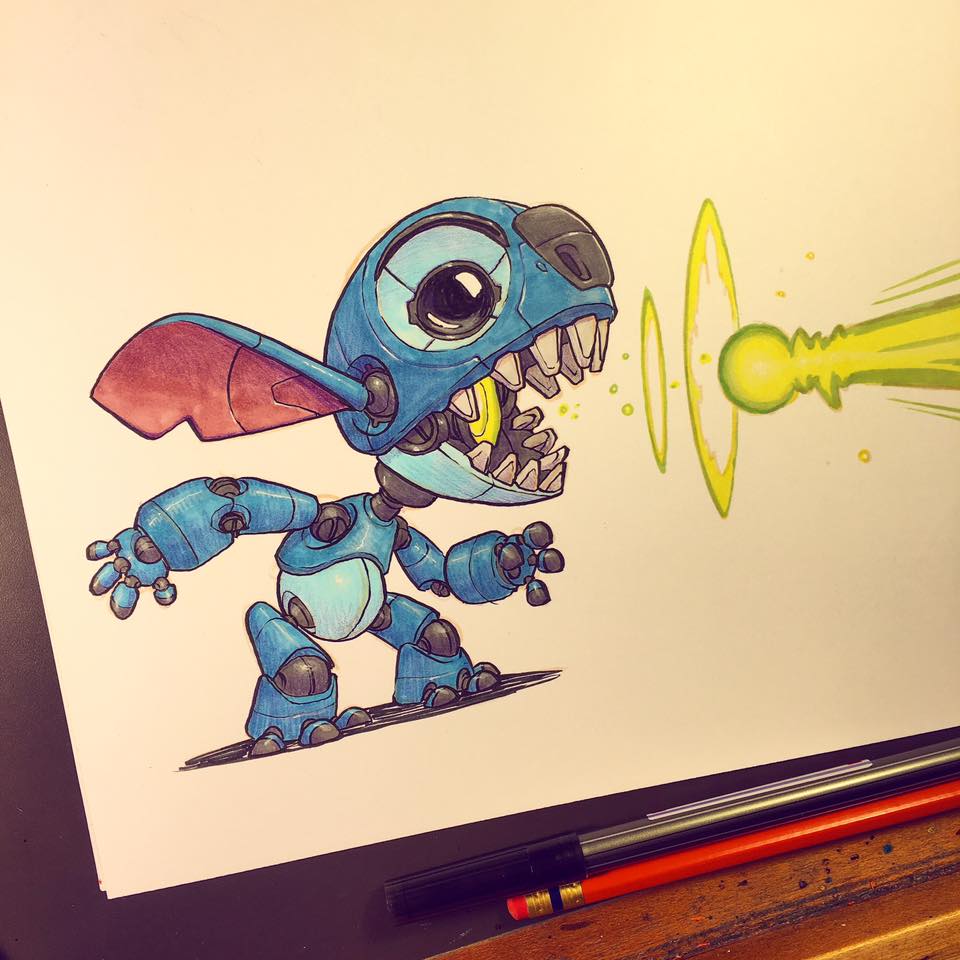 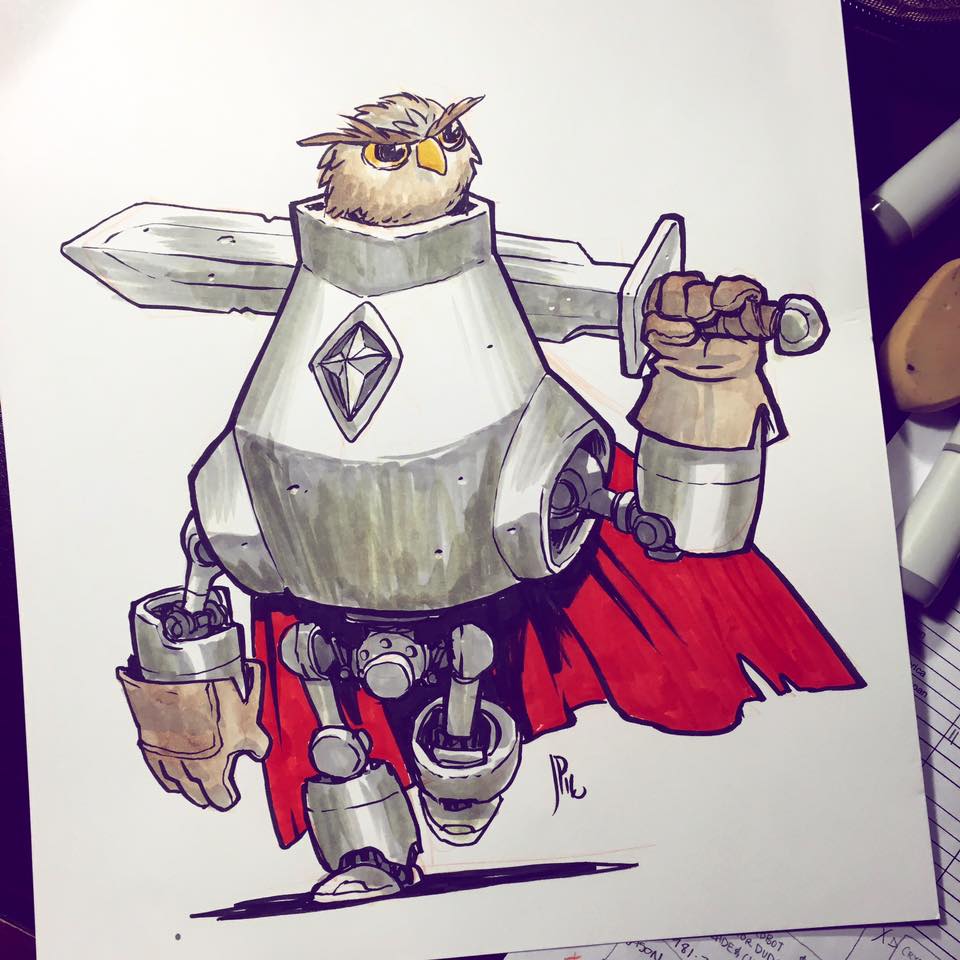 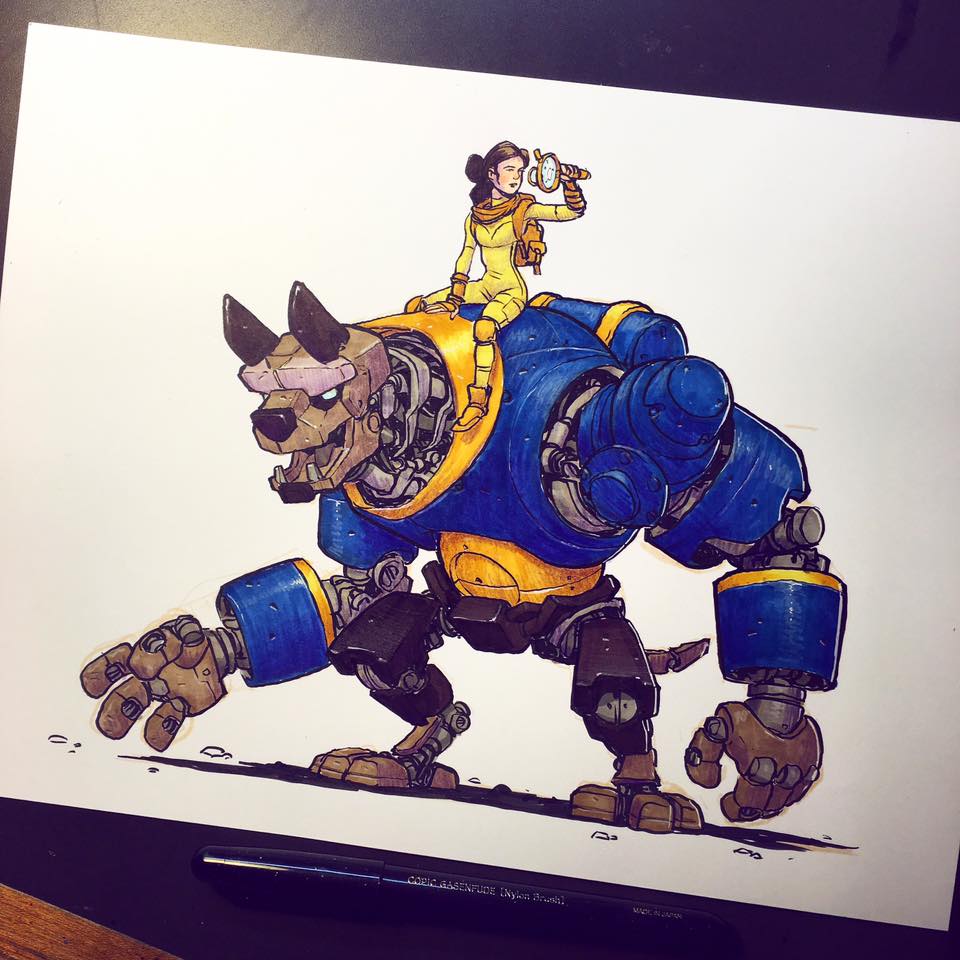 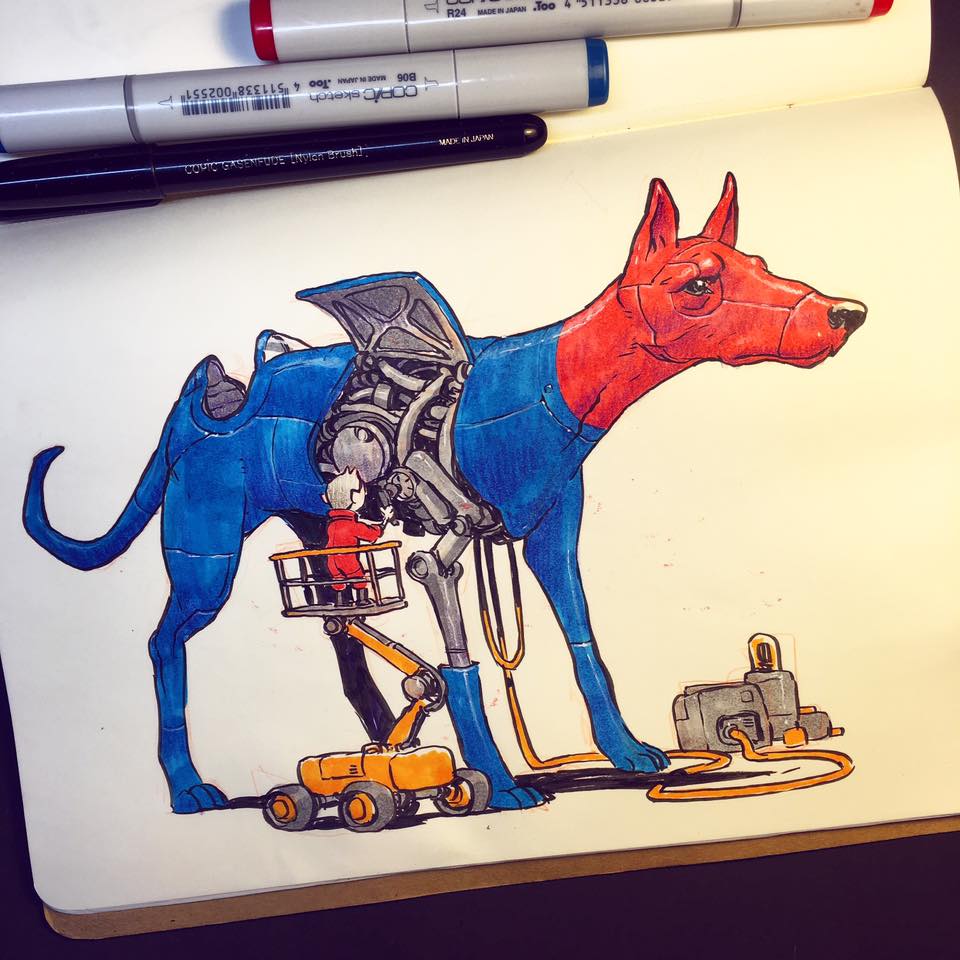 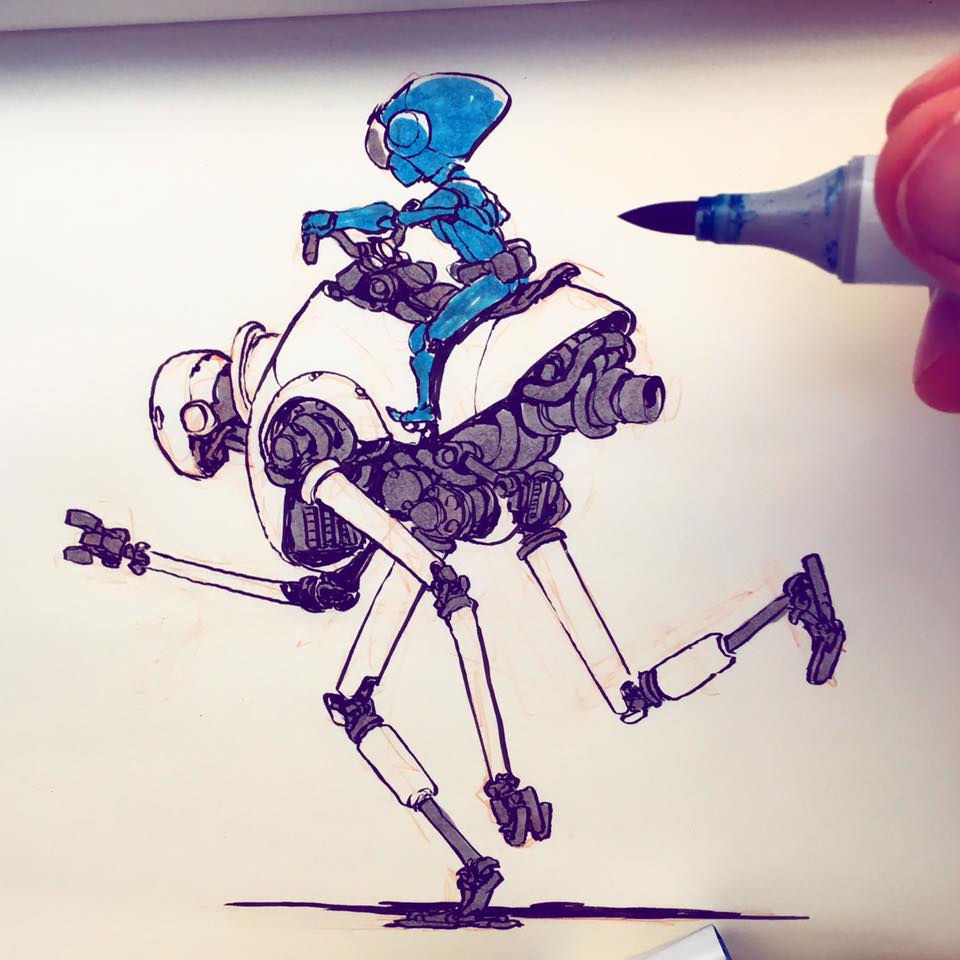 These are videos made by professionals who will explain their techniques and knowledge so that you, whenever you want, can learn and strengthen all the skills and abilities you have to achieve the goal. 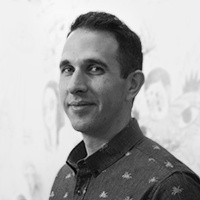 Jake Parker is an Illustrator, writer and teacher with more than 20 years of experience in the field of animation and illustration. He has practically worked in all sectors that the industry can offer: from animated films to the realization of comic books and illustrated books. Based in the US, he has worked in six different states with many companies. In 2009 began the one that today has become, possibly, the most famous challenge for the world of illustration: INKTOBER.

In the same way in its customers, we will highlight: Google, Marvel, Disney Animation or Warner Brothers, just to name a few.